Our society is inundated with choice and consumption, often making it difficult to choose the healthy path, particularly at this time of year with Holiday parties and gatherings aplenty.  This idea started me thinking about why it is sometimes so difficult to make a “good” choice.  As I got more and more involved in triathlon, I started paying more and more attention to these “little things” that help improve athletic performance.  We all know we need to train consistently, but if you are interested in getting to that next level, other things, like nutrition and body composition make a difference.  I have always been interested in nutrition, but tying nutrition to athletic performance gave it new significance and impact for me.  I started reading up and observing my eating habits.  Plus, being married means you more or less eat what your spouse eats, too, so this involved observing her habits also.

This time frame also happened to coincide with my wife and I deciding to start a family.  I did my first Ironman when my daughter was less than a year old — my wife is very supportive, indeed (a topic for another discussion).  About a year later, we had a son and now had 2 children under the age of 2.  Over the next few years, my training remained relatively consistent, I did several more Ironmans and my kids grew.  My wife and I noticed that even though we generally ate healthy, we would often make very poor choices at night and indulge on things we knew were not contributing positively to our nutrition, to say the least.  Now I am all for moderation and I believe it was Oscar Wilde that said “Everything in moderation, even moderation itself,” but these indulgences would happen sometimes whether we wanted them to or not and it seemed almost out of our control.

Then one day, I came across an article in the New York Times regarding a phenomenon called “Decision Fatigue.”  (Article is here: http://economix.blogs.nytimes.com/2011/04/14/time-and-judgment/)  The general idea is that we only have so much decision making ability on any given day.  This particular study was on judges making parole assessments and they found that if the case was reviewed earlier in the day, the prisoner was more likely to get parole than they were if their case was reviewed later in the day and the effect was significant.  Basically, the judges were accumulating decision fatigue and defaulting to the “safe, easy” decision later in the day – the one that sent the prisoner back to prison.  Another example is outlined with respect to medical decisions here: http://www.emsworld.com/article/10687160/when-thinking-is-hard-managing-decision-fatigue.

If we spend our days making decisions, by the end of the day, you are much MORE likely to make a decision based on simple pleasure (stimulating the reward centers in our brains or relating to other low-lying urges), such as eating a cookie, venting your anger, defaulting to the easy choice, etc.  Your impulse control will be diminished and you will be much LESS likely to make a decision in favor of delayed gratification, such as AVOIDING the cookie.  Decisions that take more consideration and more thought become much more difficult and are more costly.  As I read the original article, I realized this is EXACTLY what happens to a young parent!  Throughout the day, you spend a large amount of your time making decisions and having small “battles” of will with your children.  “Please eat more of your eggs.”  “Please come with us and get in the car, we have to leave now.”  “Please don’t talk to your sister like that.”  Every parent of young children knows what I am talking about and how draining this can be.

I did some more research on the topic and found the work of Dr. Roy Baumeister on a concept he calls “ego depletion.”  He has shown evidence that humans’ ability to self-regulate is limited and diminishes over time as we engage more and more in the activity itself.  He even developed the  “strength model” of self-control, making the analogy to the physical exertion of a muscle and physical fatigue.  His research also supports the idea that this ability can be trained and strengthened!  While this “energy” related to ego-depletion is more abstract, there is evidence to link it to actual glucose depletion, which brings us back to the study on the prisoners and their parole hearings.  The judges were much more likely to grant parole earlier in the day, but they also were more likely to grant parole after having had a meal break, i.e. replenishing glucose stores.

How does this relate to triathlon?  In my case, it explained my behavior and now that I am aware of this phenomenon, I am at least able to develop strategies to deal with it and work on longer-term body composition and better nutrition.  Granted, some days, you just relax, eat the cookie or piece of cake (if these happen to be your “guilty” pleasures that trigger your pleasure centers), and move on.  But in general, I try to be aware of my triggers and make better decisions.  The research suggests that replenishing glucose levels can help replenish your decision-making ability.  However, often times, this is the very thing I’d like to avoid!   So instead, as a strategy, I’ve placed this sign on my fridge in an attempt to raise my awareness of this phenomenon and choose SLEEP over SUGAR.  At least that way, I can consciously make the choice to indulge when I’m tired or forgo it in pursuit of delayed gratification. 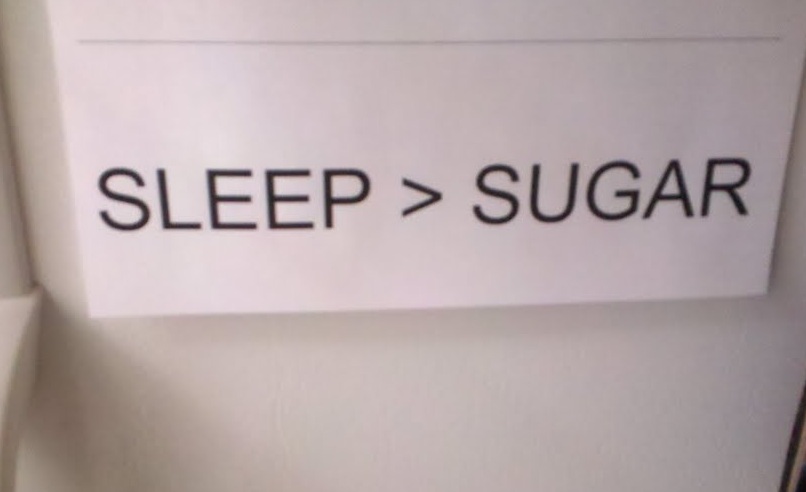 Another effective strategy can be to put a system in place where the decisions are already made for you.  For example, maybe you allow yourself 1 or 2 cheat days a week.  In theory, allowing the indulgence without complete restriction should help you stay consistent longer term….  in theory, anyway.

What are your triggers?  What do you resort to when you are tired, be it decision-fatigue or otherwise?  Recognizing these triggers and having awareness is the first step towards responding more productively and helping you inch closer to your long-term goals.

Enjoy the Holidays, but choose wisely, or at least with awareness!